Since late September, autumn, I’ve been going over to the California Polytechnic State University to draw in the Leaning Pine Arboretum with some friends who are plein air painters.

We’re planning an art show at the Morro Bay Art Association, Morro Bay, CA. in March. Lots to do, finish up the pastels that I started, matte and frame several pieces to be judged into the show.

My drawing will be the Art Show invitation. We should be picking up the post cards from the printers soon. More details to come.

Until the next sketch…peace,  Heather

I was in art school in Philadelphia, Pennsylvania. The Philadelphia Museum College of Art was where my Aunt Teeny, my mother’s sister, had gone in the early 1910s and I did in the 1960s. She had gone for fashion design and I went for illustration. I, actually, wanted to go to college to study biology, but ended up here. Mom had gone to the Pennsylvania Academy of Fine Arts and had won a Cresson Award and went to Italy to study. My father was interested in the natural sciences.

Enough of past past history and now to my sketchbook beginnings. Karl Sherman was a man who taught me “Color and Design.” A painter and printmaker teaching numerous classes.

One day he gave me a sketchbook. No recall as to what he said, but the gesture was significant because I carried it around through life and noticed it once in a while. Fear of spoiling the pages was first. It was kind of him, but I wasn’t ready to use it…gradually, the sketchbook as opened and I began to put into it things that were interesting at the time.

A Rapidograph pen and pencils were what were comfortable to work with. 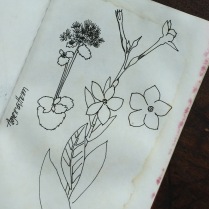 Around home was a collection of The Standard Cyclopedia of Horticulture by Bailey with beautiful botanical illustrations. Gardens were always a pleasure with all the color, forms and textures. My father’s mother had a garden in Harrisburg, Pennsylvania where she planted a series of flowers which would erupt throughout the spring, summer and fall. She’d hybridized irises which became named for her. Aunt Jess was a fine gardener. I, too, loved gardening since I’d seen my mother plant cloud of crocuses in the front lawn at 13 North Front Street.

When we moved to the Jersey shore and lived close to Barnegat Bay, gardening became a bit more difficult. The sandy soil, salty air and intense sun with still seasons going from delightful summer with light airs and at times, whitecaps on the bay to frigid winters producing a rare bumpy ice cover on the brackish bay. My first seeds to plant were zinnias. They grew so well. I was so pleased after learning about patience while I waited for them to erupt, grow their first leaves, put out buds and finally learn what color they might be.

I loved flowers, so they were first in my sketchbook even though classes in art school had many wonderful nudes to draw. Of course, nudes are the best way to learn to draw and hone your skills… eye and hand coordination. I needed lots of that!

One day visiting the Philadelphia Zoo, the oldest zoo in the USA, loving peculiar and colorful things, the reptile house was a cool and unique exhibit in a smallish brick building to explore.

So here is an exotic charming reptile from Northern Australia and New Guinea draped over a branch in the well lit display case. Even now, I could even recall the brilliant color.

There is something about drawing that imparts a permanent memory for storage in the brain.

Until the next sketch…peace, Heather

Never be caught short on food

Mark All My Words

We protect and restore the Morro Bay Estuary for people and wildlife.

The latest news on WordPress.com and the WordPress community.

exploring far and near

Your Creativity - Our Supplies!

If you surf this coast, you could make this post.